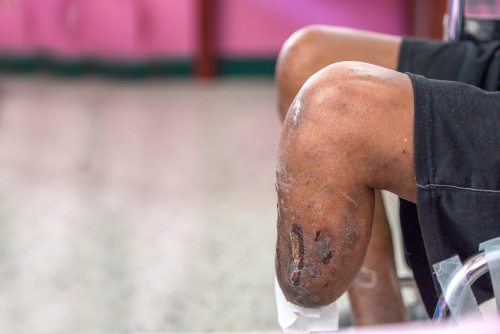 Lower extremity amputations can have a major impact on the health and quality of life of the recipient. It not only requires additional funds for rehabilitation but also prosthetic creation, management, and maintenance. African Americans are 2 to 3 times more likely to undergo major lower extremity (LE) amputations than white patients. The rates rapidly increase to eight times the national average in black populated areas with little to no quality healthcare.

Disparities exist in both frequency and level of amputation in minorities both in the presence and absence of a diagnosis. Such variations in lower extremity amputations can be attributed to a complex interaction of factors such as the peripheral artery disease (PAD) pandemic, living in segregated neighborhoods, access to healthcare, and patient compliance.

PAD is a common cause of lower-extremity amputations. It involves constricted perfusion in the lower limbs due to clogged peripheral arteries. Some of the risk factors for PAD include diabetes, high blood pressure, high cholesterol, and nicotine use.

PAD is a global pandemic affecting 8 to 10 million adults in the United States. Blacks are twice as likely to develop the disease. Further, there seems to be more rapid development of subclinical PAD among diabetic African Americans.

Lower extremity amputations can be delayed and prevented by timely and aggressive treatment. Unfortunately, African Americans and other minorities lack access to specialized care which delays PAD diagnosis and treatment. By the time the disease is diagnosed it has progressed to the advanced stage.

The American healthcare system is beset with inequalities with deep roots linked to slavery, legally sanctioned segregation, and structural racism. Such variations have a disproportionate impact on people of color and other marginalized groups. A recent study found that factors like healthcare access, household density, and pervasive discrimination are the driving forces for disparities in healthcare.

A case study was conducted between 1995 and 2003 at three Chicago hospitals to determine the cause of variations in LE amputations. They discovered a higher rate of primary and repeat amputations for African American patients at ill-equipped institutions than at well-equipped hospitals.

Improving access to primary and preventive care for lower-income patients could reduce amputation rates among blacks. The Affordable Care Act was introduced to help ensure health care coverage for millions of Americans. The rate of uninsured African Americans dropped after the implementation of this law. However, more needs to be done since the number of uninsured blacks is still higher than that of whites. As of 2018, the uninsured rate among African Americans was 9.7% while that of Caucasians was 5.4%.

The coverage expansions under the ACA are a step forward towards universal coverage. However, most of the coverage options are costly meaning that access to affordable healthcare is still a challenge for many minorities – particularly African Americans.

There’s an ongoing argument that race could be an indicator for socioeconomic status and thus for healthcare access, as the reason for racial disparity in lower extremity amputations. Low SES is linked with a higher prevalence of hypertension, diabetes, smoking, and physical inactivity – all of which are linked to amputations.

Low income can be associated with the prevalence of PAD. There’s however little research addressing the impact of SES on PAD outcomes or the interaction of race and SES on the risk of amputation for PAD patients.

The level of amputation directly impacts an individual’s ability to remain a productive member of society. It affects an individual’s psychosocial, functional, and economic status making it hard for a person to return to leisure, educational, and employment activities. Higher rates of amputations lead to increased costs with mobility and rehabilitation needs, and decreased use of and satisfaction with a prosthesis.

Early diagnosis and medical management of peripheral artery disease and associated risk factors should be prioritized for minorities, especially with low SES, given their higher predicted risk of major amputations.